He comes from Uruguay and he cooks without animal proteins. He has refused important cooperations not because of his ambition. In a world where people compromise on a daily basis just to have success he has something different in mind. His big picture is more important than some highlights on the newspapers or the critic support.

His dream is a new culinary order, fair with the animals and that can make people happy without regretting the tired and repetitive traditional cuisine. To have fun crossing tastes and consistences of an exclusively plant based alphabet is his trademark.

Imagination and creativity are the funding elements of a good contemporary cuisine such as technique and culture. Damian has all these elements. Behind each one of his creations there are, in a sophisticated twist, the complexities of the gourmet cuisine and a poetic design.

Such an honor to interview him.

What makes you passionate about the plant based cuisine?

Many things. Every day I live my job by performing cuisine as an art form and as a channel to communicate. My cuisine is a sensorial link within who create it and who is tasting.

And it is so charming as, with a dish, you can join the five senses of a person in a very intimate way. From this point of view to cook is to communicate and the alphabet offered by the plant based world is limitless. My passion is about crossing all the elements I have with the best techniques and know-how acquired through the years as well as to keep on experimenting and testing. I am looking for new shades, consistences, aromas and results that can stimulate the mind.

When did you decide to become a Chef?

I haven’t decided yet (laugh).

Seriously talking I think that my decision comes more from small daily choises. For sure to quit a safe job to bet everything on my idea of a new culinary order without animal proteins has been the first big step.

I don’t have someone who inspires me in particular. I find inspiration into music, literature, movies, graphic design and technology. Overall something that really excite me is to meet dreamers and passionate people.

Why did you decide to remove animal proteins from your menu and not to cook them?

It’s all about ethic, politics and social responsibility. Today, in 2018, someone still think that a black person shouldn’t sit next to a white person. Today, still, someone think that women shouldn’t vote and have some kind of jobs created for men. Others think that homosexuality is a desease (in some country there is death penalty for it). For most part of the people living beings that aren’t part of human specie are on a lower level and so they can be exploited, tortured and killed just to amuse our palate or our fashion whims.

I am a lucky man. I have been raised with strong values and education that allow me to have a deep respect for diversity.

Animals are into my diversity idea and not to eat them it’s not about a diet. It is a strong political act in order to stop supporting a legalized injustice.

Not to cook them grant me a great harmony with my job and allow me to show, in a smart way, how good you can eat. By taking animals off the menu I support their rights.

What are your plans for the future?

I want to build a culinary culture without animal proteins that is serious, lasting and attracting for the future generations. 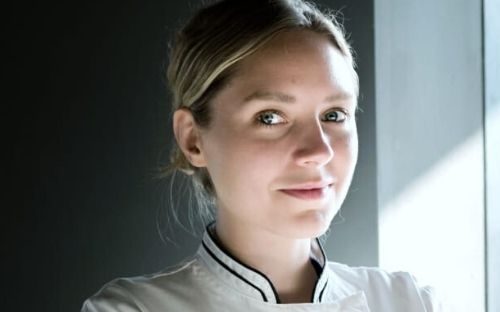